The “Cerrina” private tourist airfield, in Bruino (Torino), was inaugurated in 1959 by Aldo Cerrina for training purposes (apparently as a result of an agreement with the Italian Air Force to provide preliminary training towards the achievement of a military licence).
For promotional purposes during the early stages of its activity, Cerrina donated some fifty preliminary courses. In all, the school trained more than 300 pilots.
Embryonically, the airfield facilities began with the restructuring of a suitable large farm complex, graced with flower beds and having a large parking area. The main farmhouse held the offices and classrooms for the flight school, including a radio classroom. A specially modified barn became a workshop for aircraft maintenance while two hangars were built to shelter the fleet.
Cerrina built the airfield with the intention of creating a major attraction for free-time activities through the promotion of flying. The structure was also equipped with a bar-restaurant, a disco and a go-kart track.
The initiative was a great success. The airfield regularly had hundreds of visitors on the weekends, many of whom came just to see the aircraft fly or have a drink.
The airfield had an asphalt runway of 800 meters and possessed a substantial fleet comprising five fl.3’s, five Piper j-3 Cubs, two Fairchilds, a pa-20-Pacer and two pa.22-Tripacers, a Meta Sokol, one Zlin 326, an f.8l Falco, an f.15a Picchio and a p.57 Fachiro. The fleet was completed by a twin-engined Cessna uc-78.
In the period between the ’60s and ’70s, the airfield organized several air shows and actively participated in air races both in Italy and abroad (Round-Sicily race, City of Bari Trophy, Gulf of Naples Air Race, aerial tour of Europe and the Perpignan-Tenerife aircraft Rally, this last with four aircraft).
Cerrina’s son Sergio, an Alitalia pilot, was in charge of all the aeronautical activities until one day, following disagreements with his father, he withdrew from the management and things began to decline.
The airfield was definitively closed following Sergio’s death. In the early hours of December 23, 1978, his Alitalia dc-9, preparing to land in Palermo, crashed into the sea on the approach to Punto Raisi, killing 103 of the 124 passengers and the entire crew of 5. 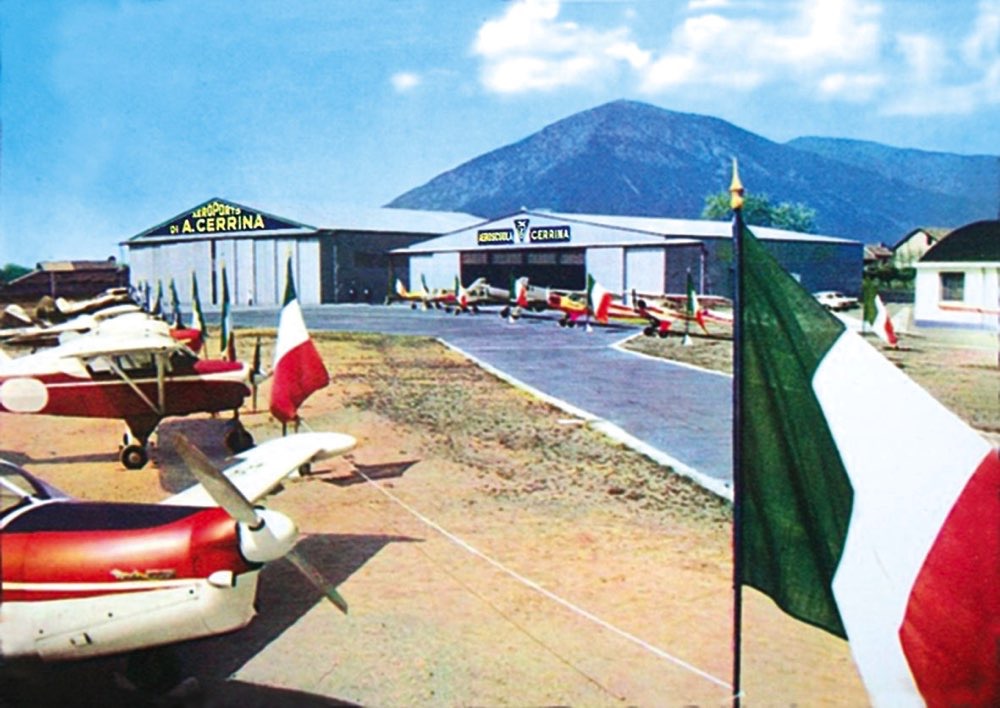