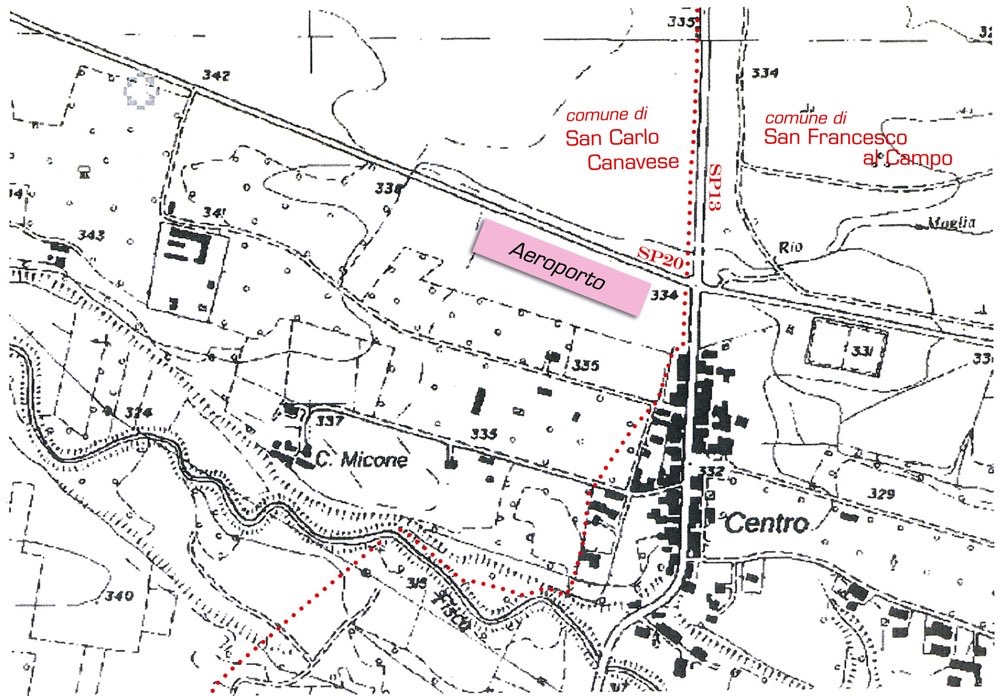 It is rather curious that the site of the airfield operating in the Vaude Canavesane area in the years before the First World War has been affirmed by some as being at San Francesco al Campo, or at San Maurizio Canavese and in other cases even at Lombardore.
In reality, the airfield was located in the municipality of San Carlo Canavese on the boundaries of San Francesco al Campo, near locality Centro, at the intersection of the sp 13 with the sp 20, which runs alongside the military firing range of Lombardore (see attached map).
The airfield thus lay within the boundaries of San Carlo, but the pilots were housed in San Francesco al Campo, and perhaps this is what has given rise to the misunderstanding.
The airfield was set up in early 1912 by military personnel from Taliedo (Milan) for future use as a training camp by the Aviators Battalion which was later formed on July 1, 1912 at Mirafiori.
Initially, the hangars were wood-framed, canvas-covered structures housing a number of Farman 12 aircraft, with their 70 hp Renault engines. These arrived from France dismantled in large boxes, but towards the end of the year the facilities were improved and the canvas hangars were replaced by wooden ones with adjacent facilities for the mechanical repairs workshop, the carpentry workshop and a warehouse.
On December 1, 1913 the first pilot’s class for officer cadets took place. It lasted three months and was followed by the first pilot’s class for officers. At the end of 1914 the Aviators Battalion had 106 pilots including 94 officers. 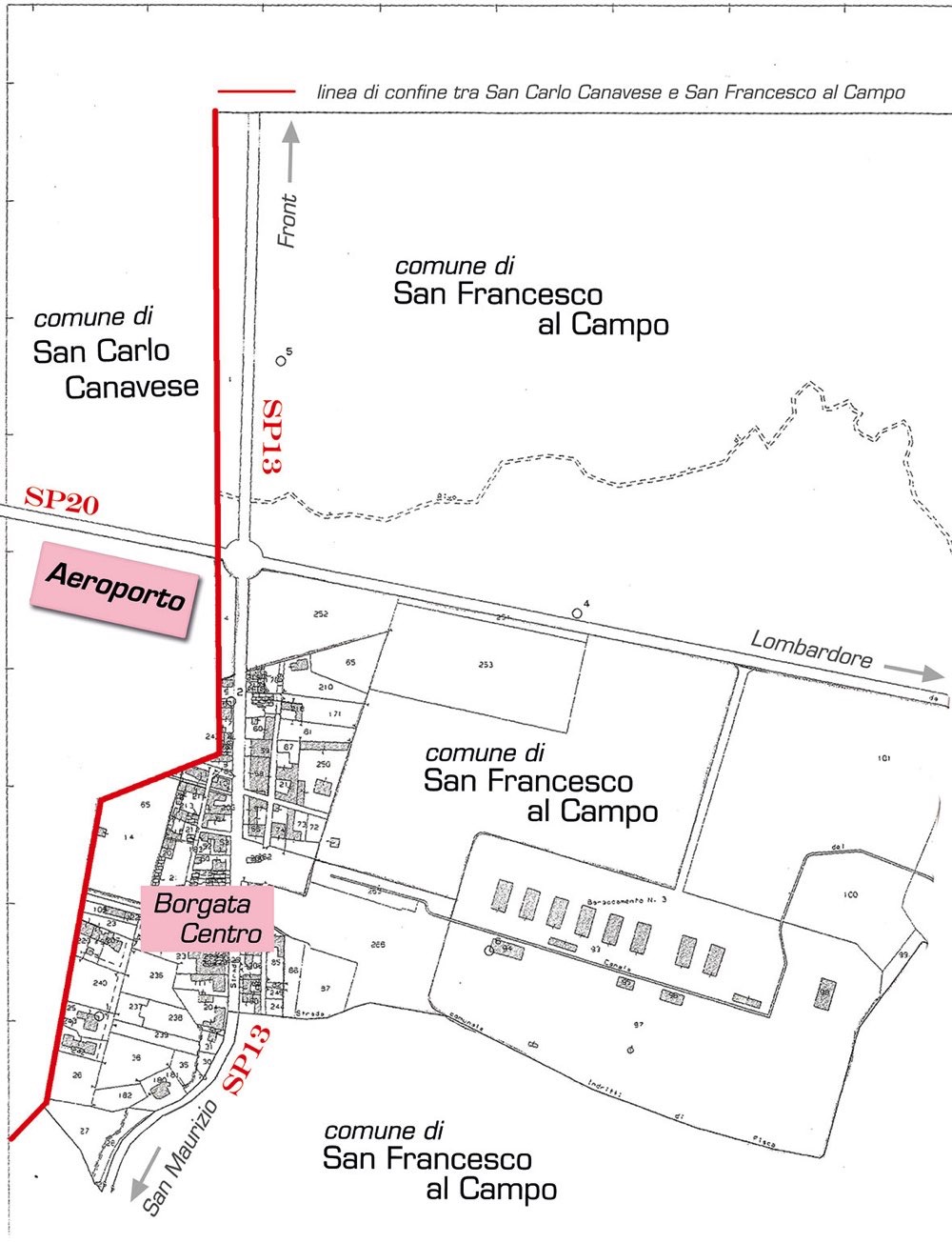 In 1913 the first experimental “air trucking” squadron for military air transport was formed. A large wicker basket was installed between the pilot’s seat, modeled into the fuel tank, and the engine. The material for transport was placed in this. Its first commander, Ettore Prandoni, came from the cavalry unit of Pinerolo, as did most of the pilots, as Francesco Baracca.

The camp did not have a fire hydrant system and in 1914 a raging fire burned down the hangars, which being of wood were easy prey to the flames with no means of extinguishing them. The hangars were rebuilt with the Farman 12’s being sent to a newly-formed flying school, replaced by Farman 14’s. This new group, formed from No.s 9 and 10 “reconnaissance squadrons” replaced the now-defunct “air trucking squadron”. 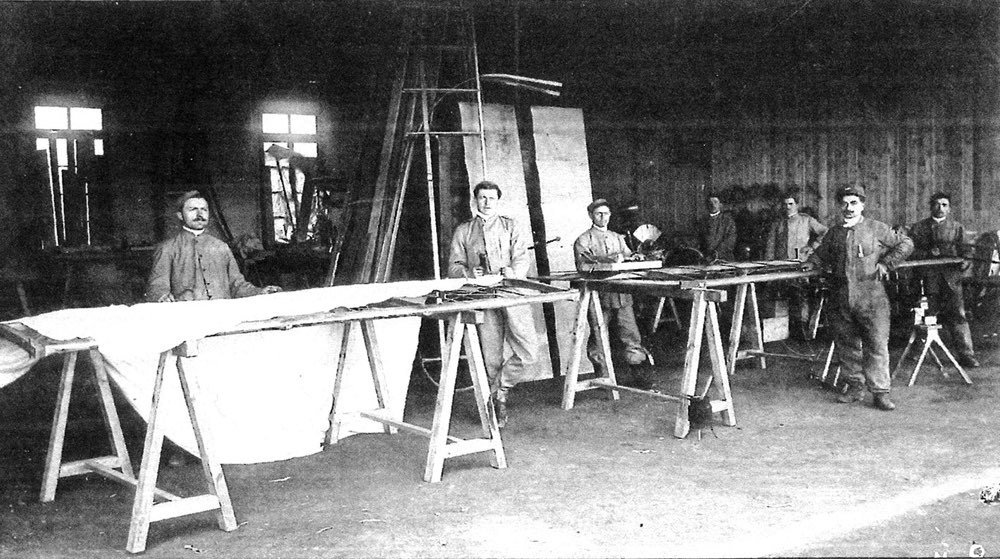 In the spring of 1915, in anticipation of the Italy’s entry into the war, the whole unit was transferred first to Taliedo and then to the Eastern front. The hangars, spare parts and ground staff followed the same route, leading to the closure of this historic site. 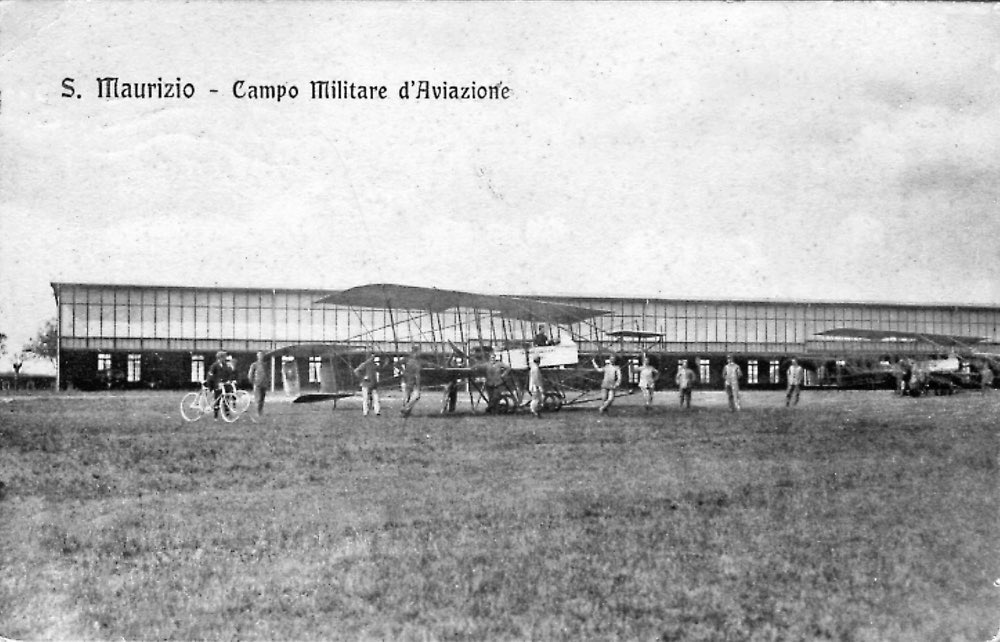