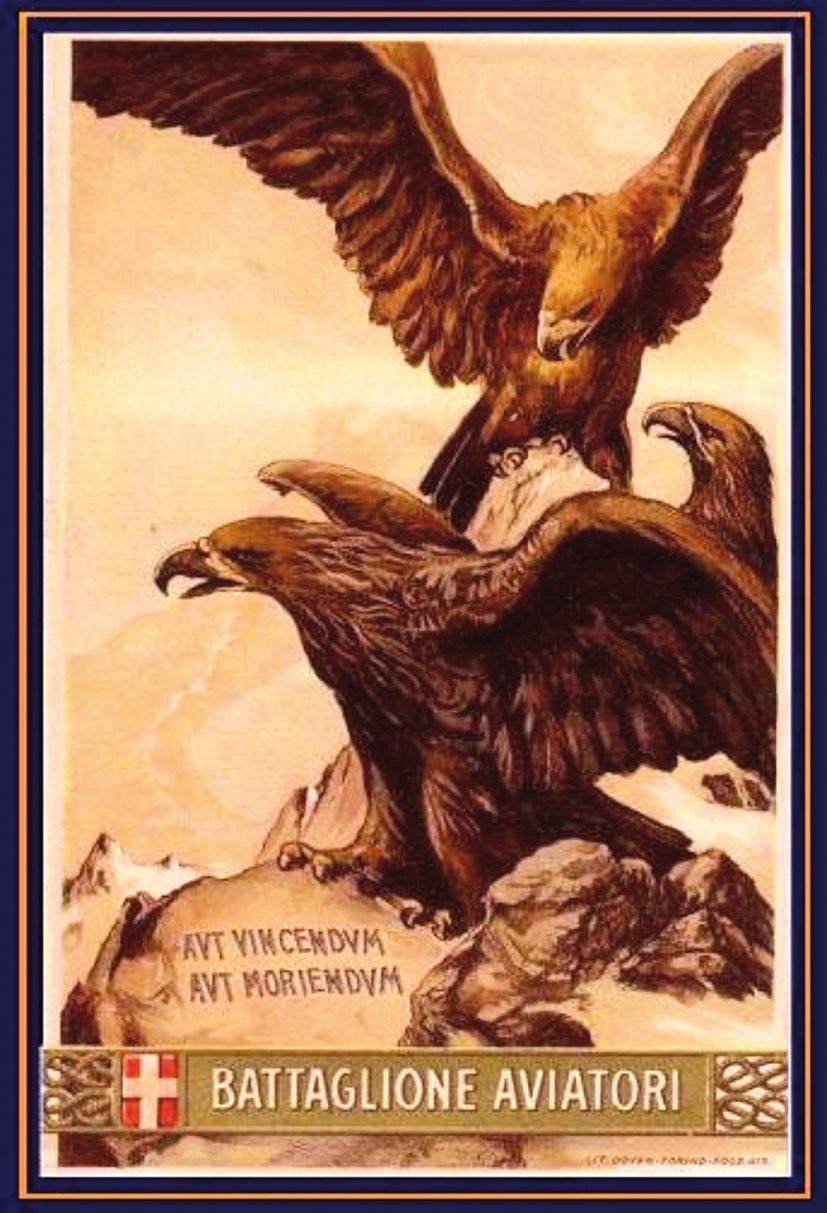 Activity on the new airfield of Mirafiori was steadily increasing. It soon hosted all of Turin’s aviation, including that of the Army, following the publication on the 27th of June 1912 of the law No. 698, which saw the creation of the 1st Aviators Battalion in Turin with effect from the 1st of July 1912. The Battalion consisted of three Squadrons and a maintenance element known as:

Time would reveal the importance of the dtam. At that time, Turin was home to the largest concentration of aviation industries in Italy and the dtam was assigned the task of evaluating the designs proposed by those companies who wanted to provide aircraft to the Army and of monitoring that the actual orders for military aircraft were performed with scrupulous adherence to the designs and used only the specified materials. It was an early version of “quality control”.
The dtam, directed by Colonel Ottavio Ricaldoni (designer of the first Italian military dirigible), was staffed by some of the finest aeronautical engineers of the time, plus a number of officers from the Army Air Engineers Corps. One such officer, Lt. Vittorio Valletta, was tasked with the procurement of aeronautical materiel from industry. It was in this context that the first contacts between Professor Vittorio Valletta and Senator Giovanni Agnelli began.
The creation of the dtam made Turin the focal point and magnet for the finest aeronautical engineers of the time in Italy, constituting a de facto nucleus of highly skilled professionals (with all due respect for the skills demonstrated by other places) which contributed to the formation of the “aeronautical intelligentsia” of the period.
The Headquarters of the Aviators Battalion became the La Marmora Barracks in Via Maria Vittoria 39 bis (which today houses the University’s female residence). Following negotiations with Colonel Moris, a motion was passed by the City Council, presided over by the Mayor, Teofilo Rossi on the 1st of April 1912:
“[…] with the intention of ensuring that Turin has this new military service”.

Mirafiori airfield was its operational base. This soon went on to become the most important in Italy.
Its Commanding Officer was Lt. Col. Vittorio Cordero di Montezemolo, with Giulio Douhet as his deputy. 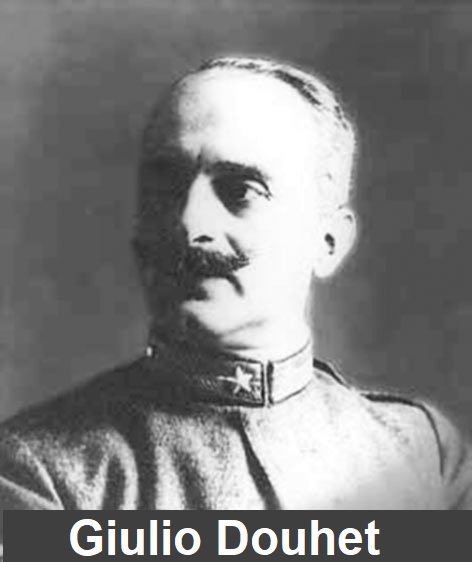 Douhet later went on to become world-famous for his studies and theories concerning the strategic use of military aviation. And again, as the result of further discussions with Col. Moris, the City Council resolution of January 7 1913 confirmed the concession of the La Marmora Barracks, for a period of 29 years, in favour of the Aviators Battalion, “[…] and further noted that the dirigible based at Leros during the Italo-Turkish war had been shipped to the port of Venice at the end of that war, pending determination of a new destination”.

Taking this into consideration, the council conceded the area of Mirafiori as the new quarters for the dirigible […] with the scope of ensuring that Turin hosted the dirigible service which was required to safeguard the western Alps”. 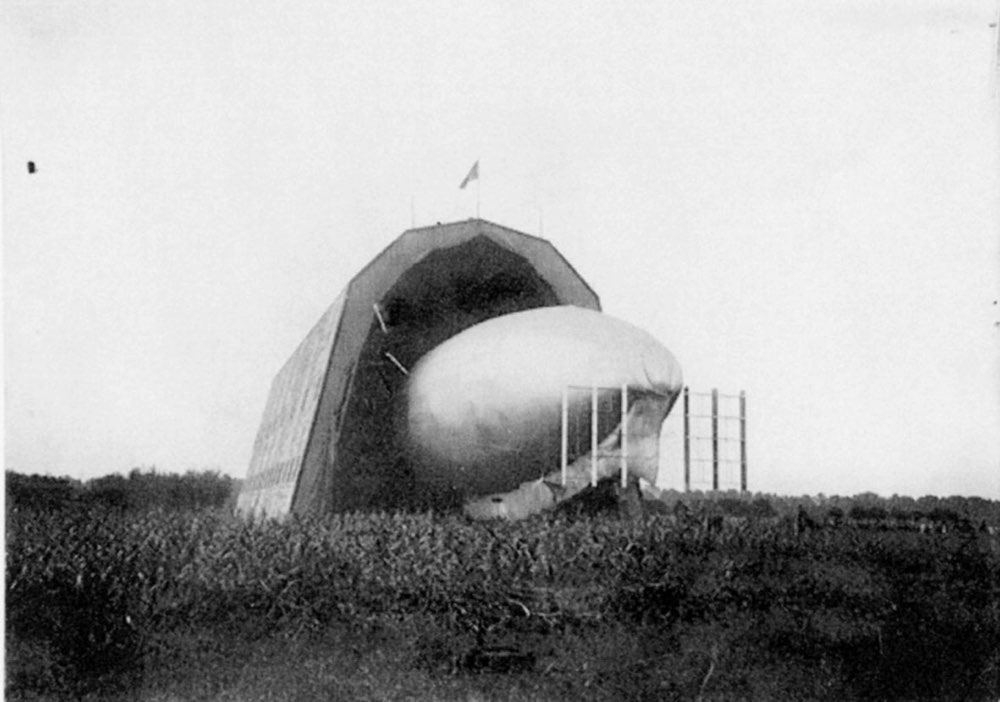 On January 29, 1913 Major Dohuet inaugurated the 1st preparatory course on military aircraft in the Great Hall of the Polytechnic of Turin. This was attended by 15 officers and on June 3 of that same year Douhet organized the first military air show with a deployment of 7 squadrons joined by 4 other groups with Blériot, Nieuport 80 hp and Farman 75 hp for a total of 32 aircraft. The command of the departments was entrusted to Major Carlo Piazza. 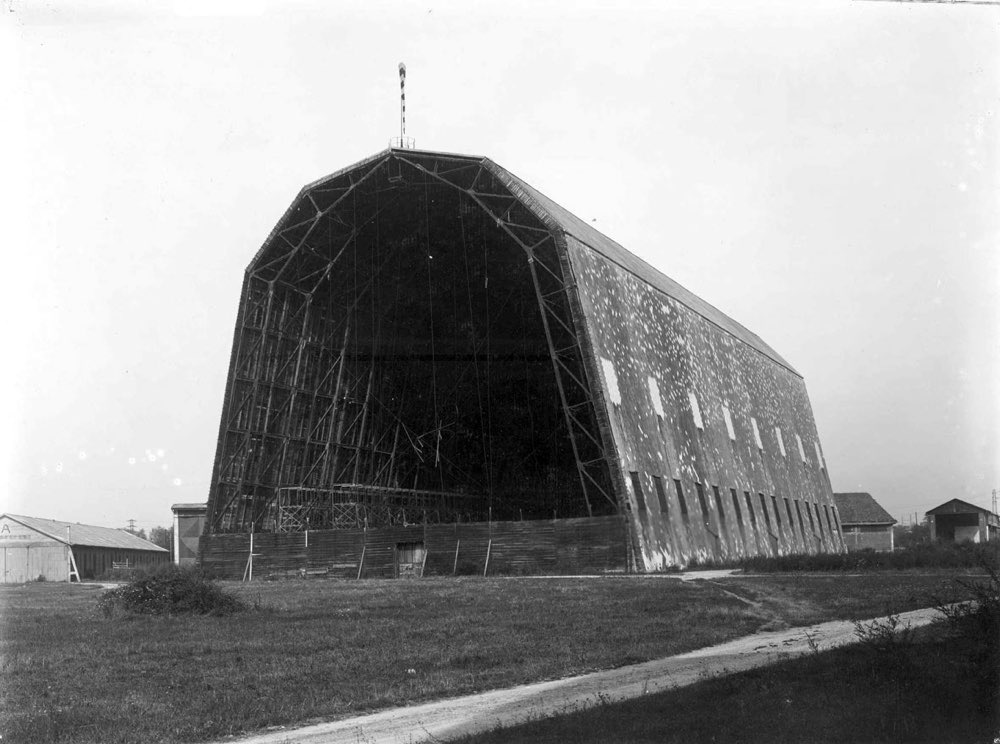 The event was attended by their Royal Highnesses, the Duke of Genoa and Princess Laetitia Napoleone Savoia, Duchess of Aosta.

At the end of 1914, the Aviators Battalion consisted of 106 pilots, including 94 officers trained at the flying schools of San Carlo and Venaria.

On May 24, 1915, when Italy entered the Great War, the Aviators Battalion consisted of 3 groups of aircraft divided into 12 squadrons with 50 Blériot, Farman and Nieuport aircraft armed only with Mauser pistols. 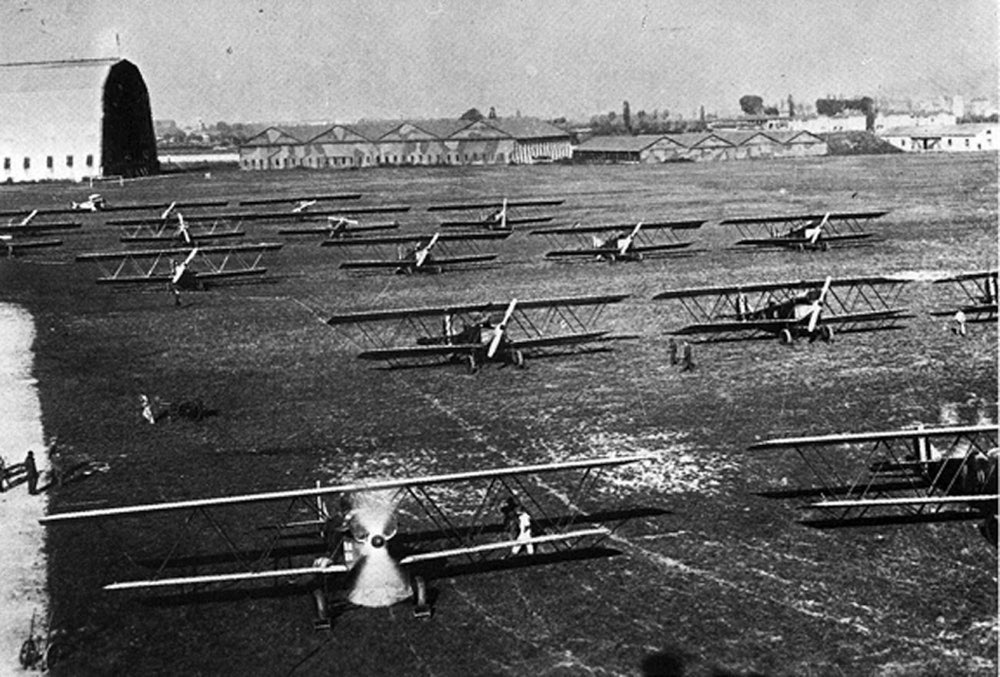 General Engineer Carlo Montù, who in the meantime had become President of the Aero Club of Italy, proposed the formation of another “Flotilla of volunteer civilian aviators” to the Ministry of War, along the lines of that which had been organized for the Libyan War of 1911 (see p. 71). With regard to this he had already “signed up” 30 adherents including Rosina Ferrario, the first female licenced pilot in Italy (January 3, 1913 at the Vizzola Ticino Aviation School, directed by Engineer Gianni Caproni). His proposal was not accepted. 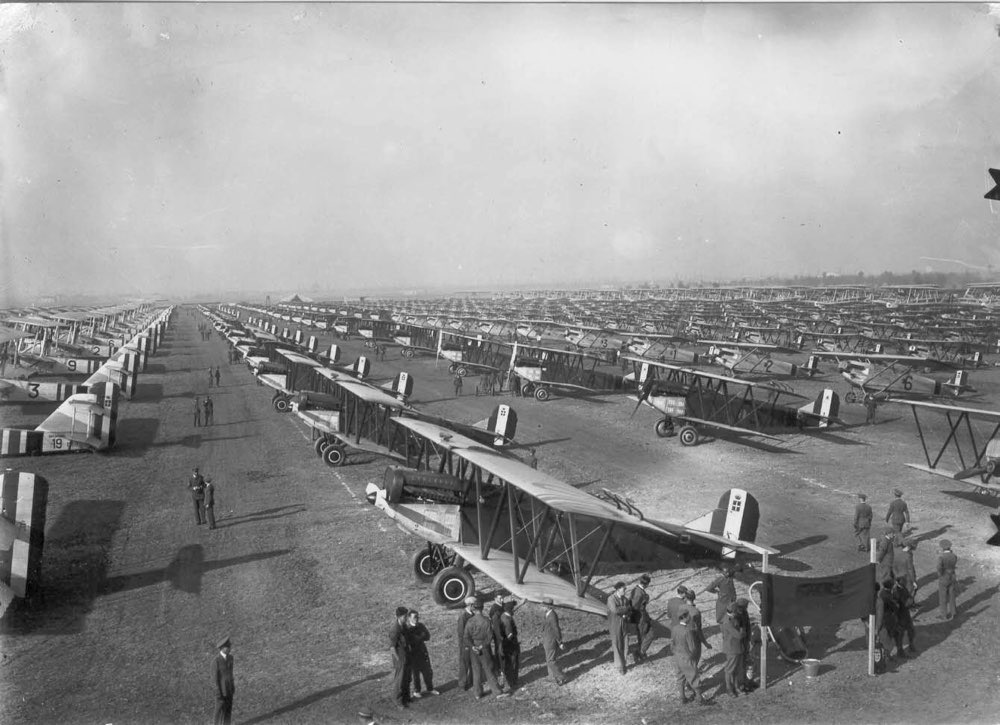 That same year, on the 3rd of June, the Aviators Battalion organised the first great Italian Aviation air show, with demonstrations by eight Squadrons equipped with Blériots, Farmans and Nieuports for a total of 32 aircraft, 25 of which had been built in Turin by the sit Company. In the presence of Major Giulio Douhet, the new Commander of the Aviators Battalion, the aircraft took off at one minute intervals, joining up to make the first large formation of Italian military aircraft ever seen.

In the afternoon of the 20th of October 1913, Major Carlo Maria Piazza took off from Mirafiori and headed to the Susa Valley. At a height of 3,200 metres (about 10,400 feet) he set his course for Moncenisio, gliding to a halt in a small field at over 2,000 metres altitude after a flight lasting an hour and 16 minutes. It was the first ever high-altitude landing. At Moncenisio, Piazza was welcomed by Capt. Contrada, the Commandant of the local Army camp, who telegraphed the news to the world. The next day, Piazza took off again at 9 am to return to Mirafiori.

1913 saw yet another novelty at Mirafiori when a huge hangar was built to house the P300 reconnaissance dirigible. 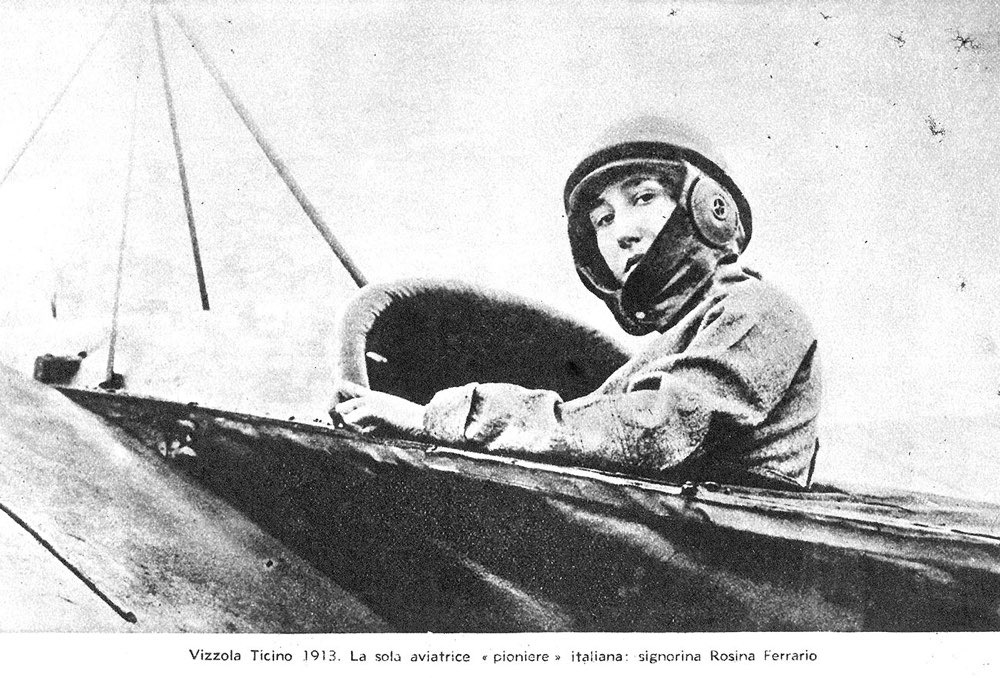 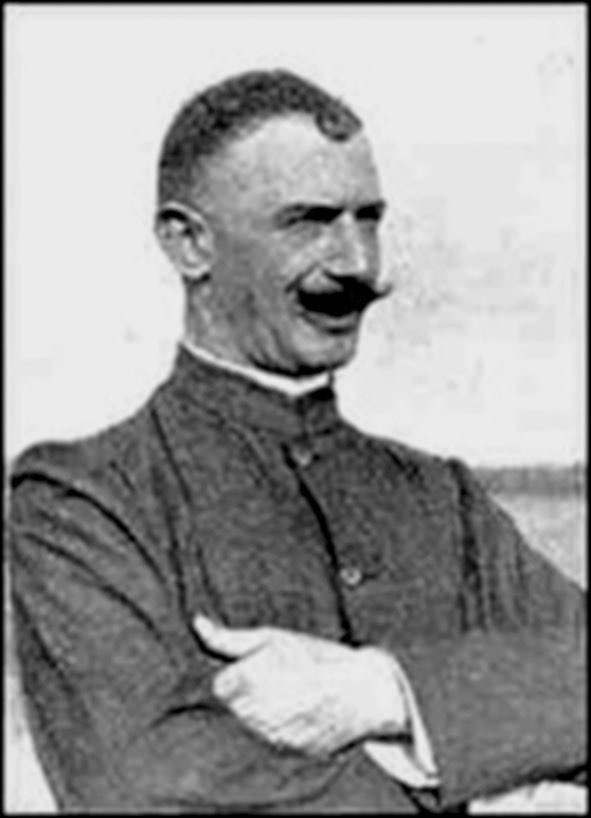